To stop violence one must use violence. To stop force another force must be exerted in opposition.

What is the difference, if any, between two people committing violence? Well, the actions are the same, but who the violence is directed towards and for what reason, THAT is where the devil is, in the details.

A person killing other people with malice, with wanton disregard for life, with the intent to inflict suffering, this would be the commission of a monstrous act.

Killing a person, who is killing other people, when the intent is to prevent further loss of life, the lives of those who are not acting in aggression but are victims of monstrous acts, and when that taking of a life is regretful and a last resort, THAT would be the most acceptable outcome given the horrific circumstances. While unfortunate, perhaps that act of killing a killer is a necessary evil. A response to hostile aggression rather than an instigation of hostile aggression.

Although taking life in any circumstance is monstrous, and horrific, the context of the killing marks the difference between reprehensible actions which are unforgivable and regrettable actions that have mitigating factors.

It takes one skilled in violence to effectively respond to violence and stop it, and to protect victims.

There are instigators of violence who commit violence on unwilling participants(victims).

There are responders to violence, those who commit violence only on those who instigate it to prevent further victims from being hurt.

There are victims, those who without the intervention of responders to violence would be exploited and violated by instigators of violence.

The reason that instigators of violence and responders to violence are not victims is that they are willing participants in the violence and act as opposition to one another where there is either a winner or a loser.

If a responder to violence wins the battle then victims are NOT hurt.

If an instigator of violence wins the battle then victims ARE hurt.

Victims are not willing participants one way or the other but their fate is decided by the victor.

Often times, both the instigator of violence and the responder to violence can appear to be equally monstrous. And there within lies the intrigue.

I love this trope!!!

Where the anti-hero or protector or responder to violence looks like and shares more similarities with the predatory instigators of violence than the victims. While the responder to violence could, by virtue of their ability to oppose an instigator of violence, inflict the same amount of damage to victims, instead they choose to protect victims, even becoming monstrous themselves to meet this end as would be necessary to oppose monstrous acts.

The boundary between responder and instigator can become blurred and the responder to violence can risk becoming the monster they fought to protect against.

I immediately think Guts, or Devil Man Crybaby, or Erwin from Attack on Titan.

Guts is a man who in an attempt to overcome the causality of destiny itself has allowed himself to be consumed by his rage and hatred in order to battle back against demons. Clad in black armor and a helmet that is in the shape of an infernal hell hound (Gut’s inner beast) he wages war on the GodHand and it’s affiliates for the abominable acts they committed on his comrades and his love interest. However, the ferocity Guts uses in battle inspires not admiration but fear.

Similarly, Erwin has regularly sacrificed comrades in order to ensure that humanity on the whole endures. To the point that his subordinates see him as a devil worse than a titan itself. Admitting as much, that the only thing that could stand up to those hulking demons is an even worse devil, a man like Irving. 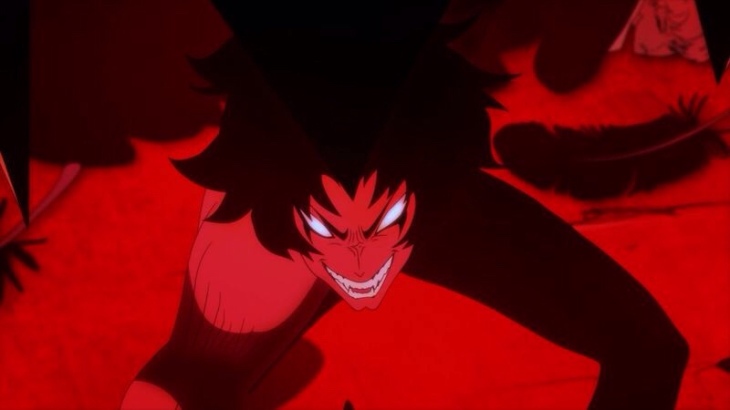 The main character of Devil Man Cry Baby literally becomes a demon in order to combat other demons and save human lives. However when he rapes another demon, nearly to death whilst fighting in the sky, one can’t really celebrate this egregious wrong even though it is an act committed against another demon who would, given the opportunity, do the same thing to other victims.

In every case it is the intent or context that has changed. The violence becomes a selfish outlet. It is no longer in the name of justice and a kind of unfortunate and regretful outcome, but rather the violence is embraced and becomes not a means to an end but an end in and of itself.

When violence is not tempered by the preservation of life and with the intent of justice, it becomes a perversion in the same spirit of monstrous violence towards victims, even if the violence is directed towards instigators of violence.

Even if the outcome of the violence is the same, there is an inherent difference between Guts slaughtering demons to survive and Guts laughing at demons and condescending them as he tortures them and they beg for mercy. In that instance he has become a monster. The killing is no longer to avenge his lover or comrades or to protect others, even if that’s what his actions will ultimately yield.

Erwin taking calculated risks and sacrificing soldiers for the long term survival of humanity is a responsibility and sacrifice and dilemma that all military leaders face. The risks and sacrifices are with the intent to preserve humanity and persevere through hardship. But when Erwin exploits his men and sacrifices them in order to pursue the object of his desire, an eldritch truth in a basement… while the results may have been the same for humanity, a competent leader making hard decisions that no one else had the resolve and fortitude to make, the motivations are haunting, not heroic. 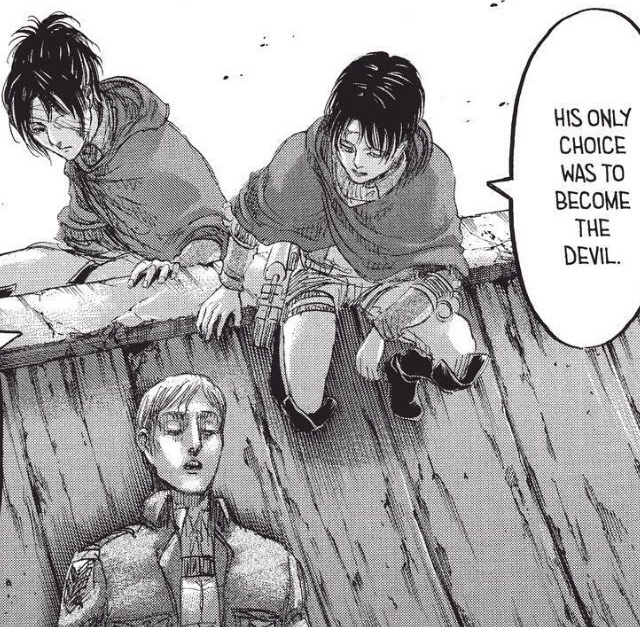 The distinction between acting in service of others and acting to satiate one’s desires IS the devil in the details, even when the outcomes are the same. If committing a monstrous act is not regretful then it is preferable, and that is where humanity erodes. To avoid disillusion, the act must be acknowledged for what it is, there can be no mistake. A response to violence is an act of necessary evil BUT an act of evil none the less.

The longer one fights with evil, the more difficult it becomes to walk along that abyss and not spill over. One must respect the peril of their actions and the darkness that a path in opposition to evil leads towards.

Stare long enough into the abyss, and the abyss stares back…