And I’m no better.

It’s not power, I don’t need to subjugate those around me, I’m no Kenny the Ripper…

BUT… I have been drunk these past few months… drunk off of pursuing an internal investigation, frothing at the mouth like a blood hound. SEETHING. It was all that mattered to me.

I saw it as this game, a competition, and I HAD TO WIN. I HATE losing.

I had been building a case on a certain associate since early April. To make things worse? No matter how polite and courteous I was, this guy was ALWAYS a bastard to me, always saying passive aggressive stuff.

“Having an easy day? Oh, I guess every day is easy for you. I wish I could be LP and just sit around all day.”

Is THAT what he thought I did?! But what about the apprehensions?! And the audits! The debits! The internals?! I manage the entire Loss Prevention Department at the store level! I write the schedules of the people I hire! I do the store wide coaching and training!

I WORK MY ASS OFF!

Even though I already knew he was violating policies and that he was a potential internal, his disingenuous assertion, that I was lazy and that my job was easy, IT FILLED ME WITH RAGE.

So I knew right then I was gonna show him, FIRST HAND, what I did for a living and what I COULD do.

AFTER MONTHS OF DOCUMENTING VIOLATIONS AND STAGING AND POTENTIAL THEFT…

I FINALLY GOT HIM! CLEAR AS DAY STEALING!

MY PATIENCE WAS ALL WORTH IT!!!

YEA! I WAS GONNA FIRE THIS GUY!

HIS ASS WAS GRASS!

YEA! I was gonna fire this co-worker!

Yea! Fire this person who I had gotten to know.

Yea, fire this human being with a life and a family…

Even if he was a punk, this was a person with a life. After being fired he won’t have any money coming in and in all likelihood he will have a hard time getting a job again…

But in my blood lust I had forgotten the MOST important part of my job.

When I call him in for the interview he’s going to be full of anxiety and fear. And I’m not gonna be smiling when that happens. I don’t feel happy anymore. I just feel sad. I feel scared for him.

And it hit me… I was drunk… I was Erwin…

But can you blame me?!

Or what about the people in Attack on Titan?! Can you blame them?

People have a tough enough time as it is.

I don’t have to tell you that life can be down right awful at times. We all have a cross to bear in this world. And, honestly, that’s USUALLY for the best.

However, no two crosses are the same, nor the people fated to carry them.

Some people carry the cross they bare on a necklace, they move through life mostly unhindered.

Other people? The cross they bear is larger than themselves. It crushes them under it’s weight and every aspect of their life is affected by this burden. The very act of existing can become a struggle.

And yet, people are resilient if nothing else. They MUST find a way to survive. The more difficult the circumstances the more severe the crutch. And then people get drunk.

Not just off of alcohol. People will get drunk off of ANYTHING that grants them respite from their hardships. To not have to suffer from pain and stress and anxiety, even if only for a SECOND..

And then take this aspect of the human condition and test it against the oppressive atmosphere of Attack on Titan.

Living inside the confines of those “TITAN SIZED” *cough cough* walls… a constant, morbid reminder that just outside those towering walls are man eating abominations. While any fate may seem preferable to being eaten alive, humanity inside those walls has stagnated. The people inside the walls are alive, but they aren’t living. Death almost seems less cruel.

Social and economic disparity ravages the last remnants of humanity inside the walls. The less fortunate struggle to get by while the royal blood line, residing in the inner sanctum, festers with hedonism. It is a brutal existence devoid of hope. And this was BEFORE Wall Maria was breached. BEFORE the over population in the inner walls from the sudden influx of refugees fleeing the titans. BEFORE all that land, the most precious commodity of all, was lost to the titans.

After Wall Maria was breached and refugees fled toward the inner walls, quality of life got worse. Over night there were thousands of extra mouths to feed and famine quickly set in. With all that lost land, the inner walls fell victim to over crowding, urban squalor and crime. When humanity could not bear to lose anymore than it already had, that was when humanity lost the most. One third of humanity’s habitable space and farm lands were inundated with man eating titans.

All of these tragedies were exacerbated by the inaction of an impotent central government. With the politics corrupt and rotten from the inside, people had little hope for their future, for the future of their children. It’s pretty damn grim.

Is it any wonder then why everyone is drunk?

Whether they be drunk on power

Or drunk on alcohol

Or drunk on sex

Or drunk on God

Or drunk on revenge

Or drunk on adoration

Or drunk even on a single, focused pursuit… no matter the cost… like Erwin…

This is true even for Erwin. But when you REALLY look at him, especially in comparison to someone like Armin, the difference becomes rather apparent.

Being drunk is a means of repressing despair, when one doesn’t have any hope left and believes that things won’t get better.

That is the greatest difference between Armin and Erwin.

Armin’s dream is the base of the mountain, the beginning of the journey. His dream is NOT the only reason for existing. Hope drives him.

Erwin says it himself, he would have given up long ago if not for that singular, focused pursuit of his dream. 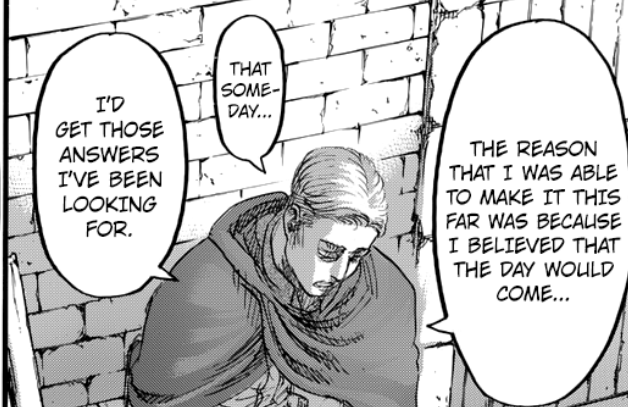 But that is also what makes Erwin’s redemption so special. In that moment where he “sobers” up.

Erwin and the others make the most difficult decision a human can make. They stand in the face of an existential nightmare, and then, knowing the outcome, persist anyway and challenge existence itself. A decision that jeopardizes their happiness, self interests, and the fruition of their dreams. But with this final determination, in their last moments, Erwin and the others see hope for humanity.

Because it is not the ones who have fallen, but the ones still left standing, that decide what the sacrifices of those that came before us were for.

Don’t EVER let it be in vain.

Don’t wither away in a quagmire of self pity. Don’t use crutches just to stay in one place. Don’t stay drunk forever.

Grit your teeth, dig your heels in, and get that cross off your back! Stop dragging it, be strong, and lift it up, and get those feet moving!

Because we’re all right behind you. 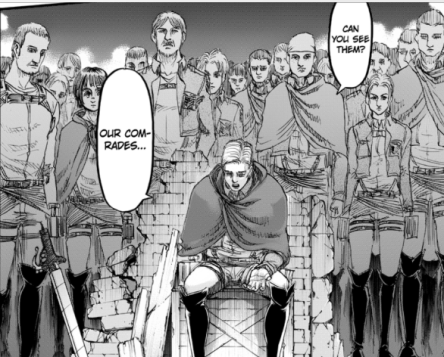