After a 40+ hour work week, over $1,500’s in recoveries and apprehensions, an internal, and training a new guy in asset protection… I needed today!

Hit the outdoor firing range with my dad and one of my best buddies.

It was my buddy’s first time shooting, my dad had not been shooting for awhile, and honestly, it’s kind of embarrassing, but I hadn’t been shooting since my qualification test to receive my license to carry a concealed weapon(talk about stress and anxiety lol).

So today was utter catharsis. It felt GOOD.

We were turning heads firing off our Smith and Wesson M-500, 50 caliber revolver. That hand cannon is a range queen! We let a stranger put one down range as well, always nice to make someone’s day!(no Dirty Harry pun intended!)

But aside from the M-500, I wanted to brush up on my conceal carry weapon, a Sig Sauer P220, .45 caliber. WHICH BY THE WAY IS THE SAME GUN IN THAT EPISODE OF PARASYTE!! You have no clue how tickled I was that my favorite handgun, my personal conceal carry, WAS MENTIONED IN THIS SHOW!

^There it is! Railed version with my Alien Gear 3.0 Cloak Tuck Inside the Waist Band Holster. And of course, a Hogue Grip.

My buddy wants to go for his conceal carry too so we had a competition. 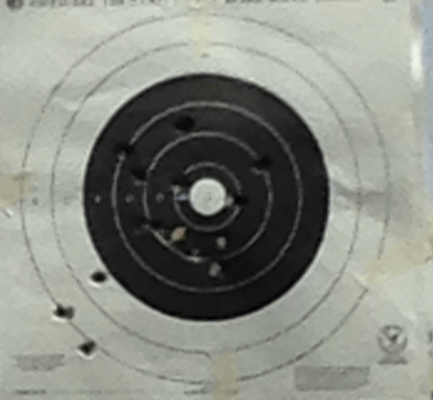 He had three wild out-liars (not that I’m one to talk), but overall a pretty nice, hand sized grouping.

And then I did my 16 shots on the same target paper.

I am disappointed. Each time I fired my first shot in the magazine, the shot went wild at the bottom. Then I would adjust and have a decent 7 shots.

Over-all 14/16 shots had a pretty tight group but I want to get rid of those wild first shots and just REALLY DIAL IN.

There was a police officer shooting next to me… didn’t help my confidence! Guy was GOOD. And I HATE losing. But, it inspired me to get better. I definitely have a lot of room for improvement but it felt good to shake off the rust! Maybe at least 100 rounds a month. Focus on form, breathing, and just get that consistency, make each round count.. And maybe I won’t shoot 20 rounds from the M500 before testing myself, because the recoil from that revolver was down right abusive on the inner palm, gave me a damn tremor and cramped fingers! Thing is a monster. BUT NO EXCUSES!

Maybe next time I’ll punch out the bulls eye too!

Then again, maybe I’ll just kick back with my M&P 15 and just plink away as I sit in the shade.
Either way, it was a great day and a great end to the week, you know, Father-Son bonding and all that and seeing my buddy. And I’m still an OKAY shot… RIGHT?! Am I delusional?! Someone pet my ego!

Anyways, anyone that hasn’t tried it at least once, get out on the range and plink some cans! You might find you have a new hobby! And it goes without saying… PLEASE BE SAFE AND EDUCATE YOURSELF ON GUN SAFETY BEFORE HANDLING A FIREARM!

Welp, until next time!

Oh yea, I know shooting isn’t anime but HEY, there’s more to life! Good to mix it up! Even so, I’ll ALWAYS have the “EPIC” anime topic on Sunday. However, I might sprinkle in some other stuff here and there now and then! They say variety is the spice of life.